Cape Point is the southern most point on the Cape Peninsula. While the best way to get here is to drive, you can also take the train from Cape Town to Simon’s Town (appx 30 rand return), then get onto a tour for appx 250 rand at a tour company next to the train station. The entrance fee to the Cape Point national park is around 110 rand, exclusive of the tour cost.

The winding road rises up from Simon’s Town and terminates at the lighthouse car park near the edge of the peninsula. From here, you can walk up to the lighthouse (about 10-15 minutes) or take the tram up. There’s a small cafe at the lighthouse in case you forgot to bring water.

The north west view from the lighthouse

Once you’ve soaked in the commanding views at the top, you can walk down to the Cape of Good Hope (1hr 15min) and get a photo at the most south western point on the African continent. There are amazing views to be had on this easy coastal walk and it’d be a shame to skip it. Thankfully the tour bus driver encouraged us to do it because it was a really hot day and I think some people were not that keen to do it. If you have your own car you’ll have to walk back up but if you’re on a tour the driver will pick you up at the bottom.

Regardless of whether you’re going on a tour or driving, it’s worth spending a day to visit Cape Point and Boulders Beach!

The builders’ plaque on the lighthouse

The northeastern view from the lighthouse

Along the walk to the Cape of Good Hope

A tiny sea bird perched on a sheer cliff 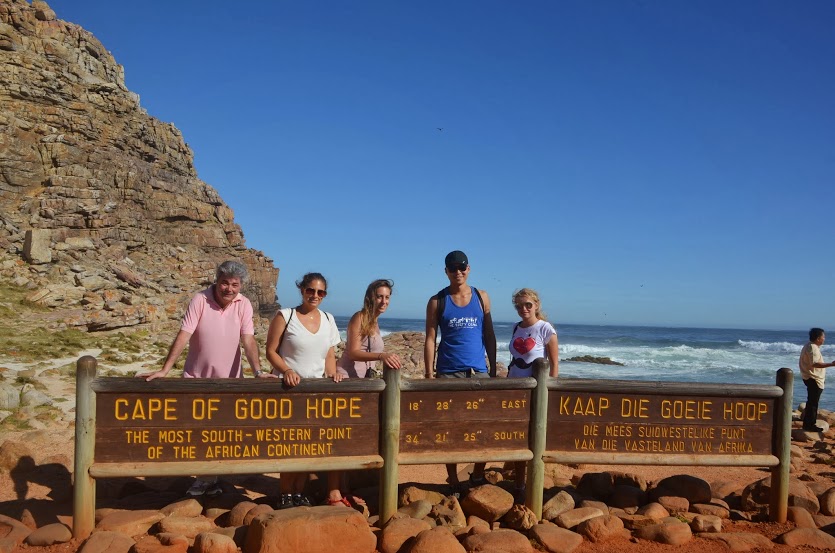 The Cape of Good Hope, with my Swiss and German crew

Wild ostriches near the Cape of Good Hope

Have you been to Cape Point?

Hi, I'm Steve, formerly a full time backpacker but for now a full time IT professional in Amsterdam. In 2010, I sold nearly everything I owned to travel the world for a year. That year has turned into 2.5 years (with a year long break working in Australia). From scuba diving to sky diving and almost everything in-between, I'm keen to have a go at it! For more info, please visit the About page.